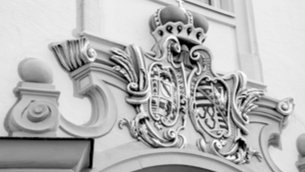 
In German, this case is shown through article declensions unlike in English where only prepositions or context are used to show the indirect object.