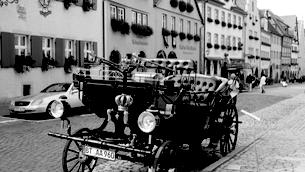 The Articles: Definite and Indefinite in the Nominative Case

In German, one of the purposes of the articles is to serve as a gender marker of the noun that follows it. They also show if the following noun is singular or plural. Finally, articles also show the case of the noun. In German, a case is a specific ending added to articles and adjectives to show the role that the following noun plays in the sentence such as the subject, direct object, etc. These are the articles for the nominative case. Different cases are discussed in separate lessons.

I. The Definite Article

The definite article in German typically takes the meaning of the in English. In the chart below, we see that each gender has its own distinct article with the plural and feminine both sharing die.